It’s hard to think about luxury watches without the words “Swiss made” coming to mind. The appellation is an automatic indication of expertise, precision, and heritage. For many, a Swiss-made watch is still considered the ultimate “you’ve made it” flex.

Breaking into the luxury watchmaking industry without this geographic accreditation and years after its main players are firmly established is a brave, if not mad, move. But it’s one that didn’t faze Roland Schwertner, founder of rising German watchmaker NOMOS Glashütte.

Founded shortly after the fall of the wall in Glashütte, a small town in East Germany, NOMOS Glashütte rose from a country in elation over its reunification but also undergoing a tumultuous economic period and an identity crisis stemming from almost 30 years of East-West division. Glashütte was already a watchmaking hub, but its factories had been controlled by the state during Germany’s separation and were being sold off after the dissolution of the German Democratic Republic. Seeing an opportunity for innovation, Schwertner was inspired to found a brand that “stood for ‘Made in Germany’ at its very best” and NOMOS Glashütte became the first private watchmaking company established post-reunification.

Although associated more with motorcars than watchmaking, Germany is recognized worldwide for its engineering prowess and influential design movements. One of the latter is the Deutscher Werkbund. A precursor to the Bauhaus movement, it was established in 1907 to facilitate partnerships between product manufacturers and design professionals and boost German industry. Construction, craftsmanship, and design are the three pillars held in equally high regard, as is selling at a price considered no more expensive than necessary.

NOMOS watches are designed following the principals of the Deutscher Werkbund from a spacious loft in Berlin’s Kreuzberg district, a diverse neighborhood packed with independent boutiques, Turkish kebab stands, and third-wave coffee shops. It’s a far cry from the opulent headquarters you’d imagine from most luxury watch manufacturers, but one that has informed NOMOS’ contemporary aesthetic.

Once designed, the watches are manufactured three-hours south of Berlin in a former train station in Glashütte. Berlin and Glashütte are vastly different places, but it’s this combination of contemporary design and traditional craftsmanship that has made NOMOS Glashütte the leading producer of mechanical watches in Germany.


Just shy of its 30-year anniversary, the German watch brand is young in comparison to its competition. What the label lacks in age, it more than makes up for in ingenuity, design affinity, and an understanding of modern luxury.

Still heavily influenced by Bauhaus principles, its timepieces are functional, simple, and subtly beautiful – the perfect antidote to out increasingly tech-filled lives and accessories. Many of the designs feature bold colors in restrained doses and are fitted with either metal bracelets handcrafted from 145 individual parts, or fabric or leather straps. The leather is, in part, supplied by the renowned Chicago supplier Horween Leather Co.


Made with such attention to detail, these aren’t watches to flash, but ones to flex subtly. Take the flagship model, Tangente. With its straightforward design, distinct typography, and tiny flecks of color, it is the kind of watch that says you have an affinity for great design but you don’t need to shout about it. And that’s the same reason why the latest version, Tangente Update, recently won platinum in the luxury goods category of the European Product Design Awards.

NOMOS Glashütte avoids integrating electronics into its watches – they are all entirely mechanical – but it has embraced state-of-the-art technologies for manufacturing and R&D. All 11 of its movements are produced in house including DUW 3001, an incredibly thin automatic caliber that measures a mere 3.2 millimeters in height.

But until five years ago, there was one component that prevented them from becoming completely autonomous – the escapement. Without getting too technical, the escapement is what makes a mechanical watch tick. It is the heart of a timepiece without which it won’t function. Escapements have no margin for error, they are crucial to a watch’s performance and these days only a handful of specialists know how to make one. Because of this, the market for escapements is a near-monopoly. To become fully independent, NOMOS teamed up with the Technical University of Dresden and set out on the huge task to develop an escapement of their own. In 2014 they revealed the NOMOS Swing System, a feat that, according to CEO Uwe Ahrendt, “feels like landing on the moon.” Nearly all NOMOS watches are now equipped with this proprietary escapement.

With 152 awards under its belt and an extremely competitive price tag, the future looks bright for the small German watchmaking company. Even the threat of the Apple watch and its tech-driven contemporaries doesn’t concern the brand. They are the first to state proudly that their watches “do not beep” and don’t need charging. And as more of us become tired of our devices constantly interrupting every minute of our lives, the tick of NOMOS watch might be just the rhythmic respite we need. 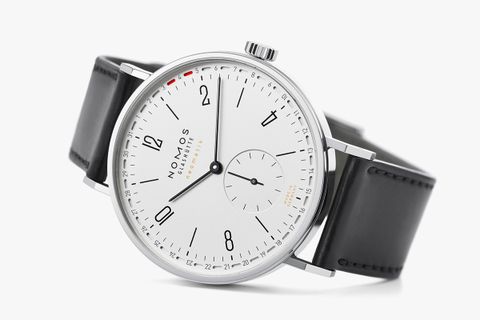 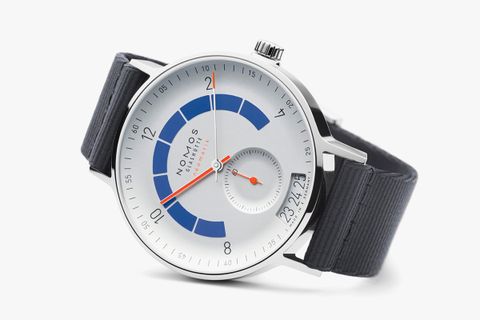 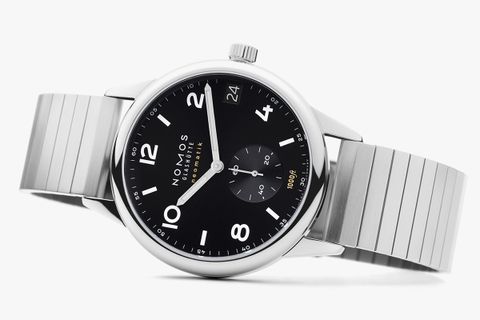 Check out NOMOS Glashütte’s limited-edition collection to mark the Bauhaus centenary and hit the link below to see the full collection.